Alongside the University of Nottingham, a team of researchers from the University of Seville has recently used 3D printing to make a nanoparticle image of stabilized gold with biocompatible systems. This could have strong implications in the pharmaceutical industry, allowing for the creation of gold biosensors that have been shown to be useful in detecting cancer cells and biomarkers. The image 3D printed with gold in this research was the University of Seville’s logo. The study was published in Scientific Reports, a Nature journal.

The 3D printing process has become an optimal means of creating intricate designs and shapes as of recent. This additive manufacturing technology allows for a reduction in manufacturing costs and allows researchers to develop technologies with unprecedented detail and precision.

The team’s research focused on a technique known as inkjet printing, which bolsters high resolution images and can print more than one material in the same printing session. The Seville and Nottingham researchers hypothesized that this technique could be used to create patient-specific biosensors based on gold’s biocompatibility and conductivity.

The existing gold inkjet printers leverage gold in the nanoparticle form, which results in a very unstable precursor since these particles bind together and are challenging to print. This has made stale, easy-to-print gold inks an area of interest.

In this recent breakthrough study, the researchers used polymers with a unique comb structure they developed to make tiny gold nanoparticles. These particles had very high stability that was thoroughly investigated over time. This work was led by Ana Alcudia Cruz, of the University of Seville’s Department of Organic and Pharmaceutical Chemistry from the Pharmacy faculty, with contributions from the group led by Rafael Prado Gotor of the Department of Physical Chemistry, of the school’s Chemistry Faculty, and the University of Nottingham’s Ricky Wilman

Several polymers were created from arabinose, an easily acquired sugar that enables the material to be biodegradable and biocompatible. This also circumvent the pollution that is typically created by making traditional, oil-derived polymers.

This is the first time that a polymer of this type has been used to create gold nanoparticles. The nanoparticles were taken from three different polymers and were of appropriate size for inkjet printing, being no larger than 10 nanometers. These particles were also found to be stable for at least six months. 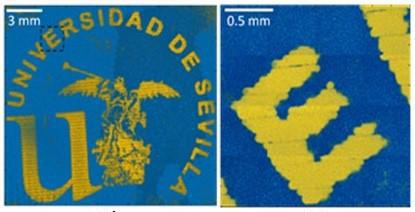 3D printing with applications in the pharmaceutical industry https://t.co/FcKMHz4U3D pic.twitter.com/ycwhwAEuLN