With the newly approved Lotus Edge valve hitting the market, it will join two other industry standard TAVR devices and offer physicians another option for treating patients with severe aortic stenosis. Here are some quick essentials about each of the three TAVR devices.

The Evolut system (pictured; image courtesy of Medtronic) of transcatheter aortic valves builds upon the standard CoreValve technology. The Evolut R valve features a supra-annular self-expanding Nitinol frame and a porcine pericardial tissue valve. The Evolut PRO contains the features of the Evolut R, but differs by featuring a pericardial wrap around the outside of the frame for advanced sealing. The Evolut PRO also has expanded annulus range. The EnVeo delivery system used for the Evolut valves also offers the option of respectability. 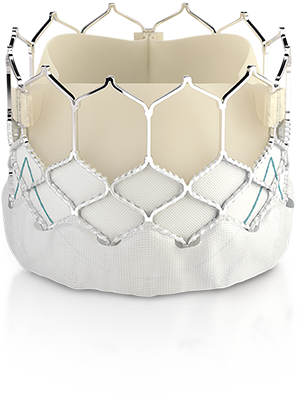 The SAPIEN 3 transcatheter aortic valve was evaluated and showed efficacy in the PARTNER clinical trial program, which represented “the largest, most rigorous comparative body of evidence in the history of aortic valve replacement, with more than 10,000 patients studied,” according to the manufacturer (Edwards). It is also approved for valve-in-valve procedures. The valve utilizes a bovine pericardium tissue valve and a polyethylene terephthalate (PET) outer skirt. Related devices include the SAPIEN 3 Ultra, which features a taller outer skirt height and textured PET material, and the SAPIEN XT, also approved for valve-in-valve procedures. As previously reported on DocWire News, the Lotus system (Boston Scientific) of transcatheter aortic valves welcomed an FDA approval for its most recent device, the Lotus Edge valve. The chief distinguishing factor for the Lotus valve is the ability to reposition the device. Lotus Edge was evaluated in the REPRISE III study.

All images courtesy of the manufacturers.